Red circle with arrow – that’s a fish head tossed skyward by the man with the outstretched arm. A great day to be a gull. Bad day to be a Sockeye trying to make it upstream past the gauntlet of dip nets. We absolutely slayed ’em 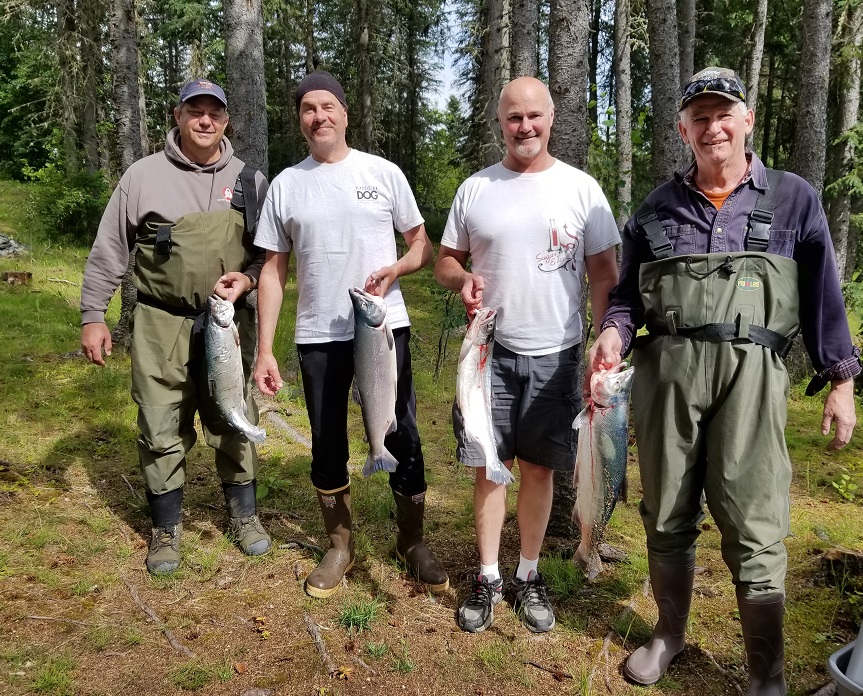 Among the five of us (Gloria not shown as she was taking the pic) we brought home fifty or more Sockeye salmon (aka Reds). Being men, there is something deep in our Amygdalas that causes us to want to hold up dead things and appear proud. Later that same evening back at home with HW, I smeared one of the fillets with olive oil, sprinkled it with salt ‘n pepper and grilled it until just warm in the center. I do like salmon, although being it’s a rich protein I have my limits, but it doesn’t get any better than that, with the possible exception of cleaning and eating it right on the beach. My neighbor offered to smoke a bunch for us and I gladly took him up on that. He covered the fillets with salt and brown sugar overnight, then smoked ’em for about eight hours. Knocked on our front door the next day and handed them to me, fresh out of the smoker. Tasted like seafood candy. Atop a cracker smeared with cream cheese – heavenly. The Dog eyed me the entire time I sat in the recliner with my feet up gorging on one after another, “What, you’re not sharing any of that?“

Our friend Chris who lives in Virginia is up for a two week visit. She and HW drove to Fairbanks to visit with HW’s brother and family. One of his two daughters is now taller than HW. Crazy, it seems like it was just yesterday they were mere munchkins playing us for the amatuer parents we are.

As the garden grows higher the days grow shorter. Bad year for tomatoes and peas, yet the potatoes – if the volume of their greens is any indication – are loving the cool weather. The raspberries are starting to come, yet it’s too early to predict the size of the harvest. The grass keeps growing like mad. Must’ve been that fertilizer and lime I dumped on it a few weeks ago. Note to self: Don’t do that again, you won’t have to mow so often.

I recently got a new phone, a Samsung S8, along with a pair of 3D virtual reality goggles and a wireless charging station for a ridiculously low price during one of those super-duper, 24 hour-only Amazon Prime shopping days. I saved like $275. I prefer to buy locally but with deals like that whatya gonna do? I invited HW to try the 3D experience. For her demo, I played a snippet from Jurassic World where a life-size Brontosaurus stands up and walks right at you, then peers into your eyes from what seems like two feet away. She was like everybody else who tries it for the first time, head bobbing and squirming in her chair the whole time – “Whoa! Whoa!!…” Funny.

The user manual for the goggles included an unusually long list of cautions, like how to avoid seizures, interference with medical devices, repetitive stress injury, etc. The most amusing one was: “Do Not Bite or Suck the Device.” That reminded me of an instruction that came with a complimentary shower cap in a hotel where we once stayed – “Fits Just One Head.”

“Look honey, we can save the hotel money if we stretch this around both our heads and shower together!“

Recently, one of our senate critters was one of only three republicans to defect and vote NO on a bill to continue the debate on the Repeal & Replace act. Like most things I’m of two minds about this. 1) Not surprised that hard core republicans are pissed at her. For them, she’s a traitor to her party and its most hallowed cause (now defeated). 2) Completely understand why she did it – many people in Alaska are on Obamacare (~ 16,000 of 19,000 receive a subsidy) and many more are on medicaid, which would have been threatened by the Repeal & Replace act. Given those facts she voted to protect many of the very people who sent her to Washington to represent them. I think that’s what we’ve been told is the way representative democracy is supposed to work?

Nevermind that the cost of a premium in Alaska really has skyrocketed, way higher even than the rest of the country, over 200% in the past four years. Worse, there’s only one insurer left up here writing individual policies – Premara.

The way I see it, either way Alaska is screwed. Keep Obamacare and premiums continue to rise (even if the increase is paid by the government in the form of a subsidy, doesn’t matter, somebody has to pay the increase). Repeal Obamacare and whole lot of Alaskans can no longer afford health insurance, or will eventually have greatly reduced medicaid benefits.

Oh well, it’s above my pay grade to fix the problem. Think I’ll fix myself a martini instead.