He was born in Wheat Ridge, Colorado on October 24th, 2000. I used to say “whelped” instead of born. I’m not sure why. Born is born, why do we need another word? And boy was he ever born. I was probably driving to New Mexico from Seattle, and although I can’t remember exactly what I was doing that day, I bet it was a bluesky day, one of those days when you wake up and sense something is different in the world, optimism, hope, that kind of thing. I was on collision course with an Airedale. Who knew? Certainly not he or I.

His breeder and her family called him the “Tan Man”, because at birth he was so, well, tan. Airedale puppies are mostly black at birth. He was the shy guy in the litter. When called for dinner his brothers and sisters would run like the wind, but not the Tan Man, he’d hang back and think about the situation first. And if you doubt an Airedale can think, conceptualize a command before acting on it, I urge you to read what Fran Peck has written about the Airedale Terrier, and reconsider.

A good friend of mine drove Tan Man from Wheat Ridge, CO to Taos, NM, where I first met him. Sure enough he was pretty tan, just a little ball of fur and energy snoozing away on a towel in a cardboard box. When he woke up he’d teethe on the first thing he saw, and if that happened to be a human appendage, so be it. For the first six months, as we got to know each other in Santa Fe, my arm looked like I was a heroin junkie. He was a feisty bugger. One day he came roaring out of the bathroom trailing a full roll of toilet paper from his mouth, and I swear as I tried to run him down he TP’d the entire kitchen and dining room in under twelve seconds. We talked about it afterward. I told him what was acceptable behavior and not, and he seemed to understand, so I reloaded the dispenser with a new roll and the very next time he did it (within five minutes) he improved his time to under ten seconds!

Months later when we moved into a new house he got wind of the jack rabbits that would come into the backyard. Once, when my parents were visiting, Tan Man was playing calmly — not a word oft used with Airedales — on the living room carpet, taking apart some toy I’d bought him, one of those toys that’s advertised to provide “hours of fun for your puppy.” Minutes was more like it. Anyway, my dad was in the living room when all of sudden Tan Man shot up and raced to the patio door and went right on through the screen as if it wasn’t there. That’s what my dad said, I’ll never forget the look on his face, half amazed, half concerned, “Why he just kept on going like that screen door wasn’t there!” I found Tan Man about a half mile down the dirt road, putting the fear of dog in a jack rabbit that had disappeared down a hole. Man, could that boy run.

Since he was born and raised at high altitude he was basically a lung on four legs when I got him to Anchorage in 2001. It must’ve been like oxygen doping for him, to move from 7000′ to 400′ above sea level. During our mountain hikes he’d scale a ridge line and run it, paralleling our progress in the valley below, come roaring back down, get a drink from the river, and back up he’d go, hardly winded, like nobody’s business. In ’02 I took him with me on a mountain bike ride, 16 miles up and over Lost Lake, AK. In all the pictures I have of Tan Man from the nearly twelve years we’ve been together, none better capture the sheer alacrity and love of life than this one: 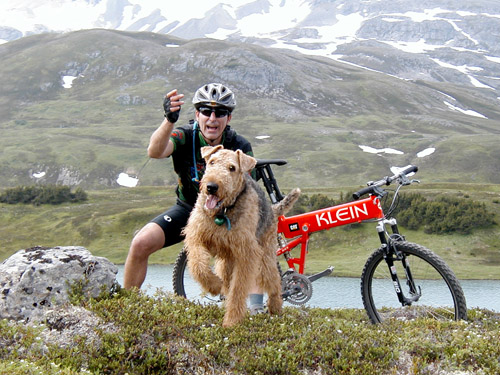 He wasn’t too keen on traveling by car to Cleveland in ’05, but he and his best friend Lucy (our Husky mix) did the three week trip without complaint. Tan Man especially liked the Super 8 hotels (he called them Sleazy 8). One day he slipped his lead coming out of our room and promptly bolted for the lobby area, where I found him standing next to the “All Dogs Must Be On A Leash” sign, brightly wagging his tail while fixed on the desk clerk expecting a treat. And then there was the infamous day near Cleveland, at “The Farm”, a multi-acre property where we frequently went to run off lead, when Tan Man & Lucy just up and disappeared. Sure, they’d roam too far for comfort now and then, but they’d always come back. Always. After two hair-ripping hours of looking for them, a man suddenly pulled up in a car at the police station where I’d walked with an old woman who offered to help me find them, and asked if anybody had lost two dogs. The coincidence of that intersection in time still gives me a chill. We got into his car and raced down a long hill to the place where he’d last seen them. All the while I’m dreading the sight of two dead dogs in the middle of a busy road. Instead, there they were, on the side of the road next to a pickup with a guy named Tim, who had stopped to help when he’d seen them walking together down the center line, “Like they owned the place,” he said. It was the only day in all our years together I thought I’d never see those two again.

In ’09 we were all back in Anchorage again, and everyone was happy. Because coming home does that to you. And not a peep out of Tan Man or Lucy during the entire 5000 mile drive. Not a single complaint. In fact, two better driving companions I can hardly imagine. Guess they knew where they were going is why. And once we were home — me, Nancy, Lucy and Tan Man —  we all roamed again, into the mountains, down to the sea, through the parks, in summer and snow, alone and with friends, in good health and not so good health. Because, you see, dogs aren’t complainers, they wag more and bark less. They are loyal, they stick by people, for better or worse, they don’t give up and they ask for little or nothing in return, merely a pet on the head or a scratch behind the ears when they greet you at the door. And they always do.

Yet nothing lasts forever. Not even the Tan Man. Oh that we wish he could. Oh that he had. The undiagnosed lump in his chest did get bigger, but almost imperceptibly. Like most dogs, maybe Airedales especially, he hid his pain, never putting it on display, as if to say, “Look at me, I’m hurting.” Nope. Not the Tan Man, he was as stoic as they come, even demanded to jump (fall really) into the back seat of the Subaru, to go with Lucy on hikes at his favorite park. He wasn’t going very far lately, a few hundred feet maybe, before his leg would give out, and the cataract in his left eye didn’t help matters, but he’d chug along at his own pace. The whole time never issuing a single bleat, not once. Back at home he’d eat a full bowl of food, drain a water bowl and lie down and continue to suck it up.

He was like that, right up to the end, this morning.

Even now, at the kitchen table writing this, when I hear a bark outside, it’s a phantom bark, I know this, but still I look up and listen.

For Rufus, the Tan Man.

It’s not him of course.

There’s just a big fat hole in our hearts now, where he used to be.

10 thoughts on “Friends of the Tan Man”