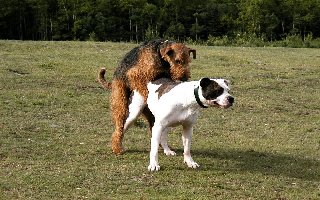 There was a big hubbub recently in Anchorage over dogs off leash. Even in The Last Frontier we have to deal with crap like this. Seems the volume of complaints had risen abruptly, so city managers said to expect beefed up enforcement. They contract animal control out to a private firm, which Master says has a staff of about three people. One of them is the guy who tootles around town in a little white truck putting the fear of god (that’s dog backwards) into my homeless friends. The warning appeared in the Anchorage Daily News.

Well, talk about complaints. Master and gobs of other people sent a massive number of missives to the new mayor’s city-in-transition suggestion box. Evidently this got their attention because yesterday in the newspaper Master read that they’re suspending increased enforcement, basically because the city is broke, so they said, but they also mentioned they were shocked at how much e-mail this generated from outraged uprights. It was rumored that the consensus of those writing in favored putting teenagers on leashes first.

So, I’m happy, and the rest of my friends and their Masters too, as we relax back into our former behavior, enjoying an hour or so of anarchic lawlessness at the de-facto dog park at University Lake.