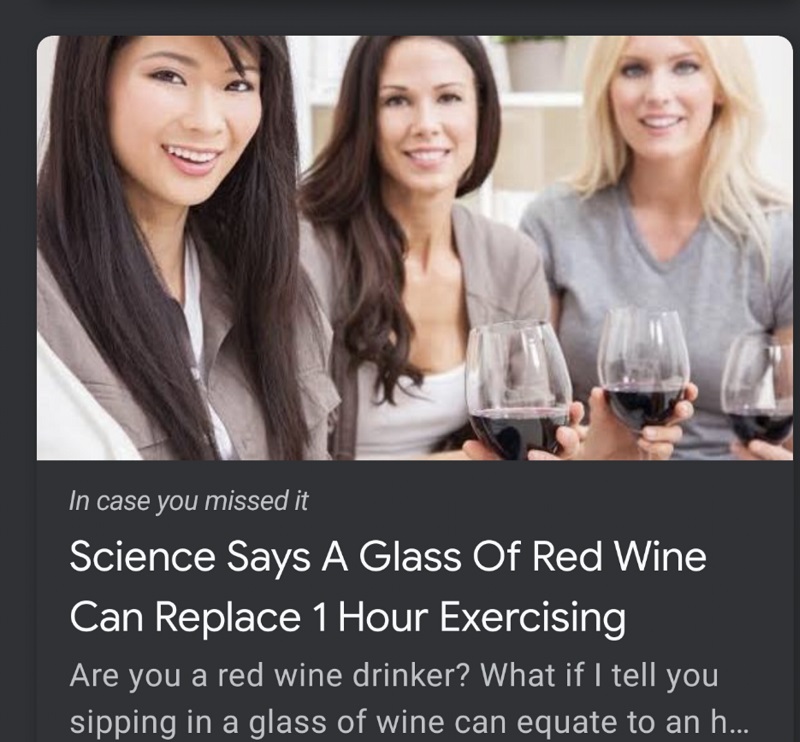 I see. So if I got the math right, knocking back an entire bottle would free me from having to walk the dog pretty much all week! I mean really, just look at those three hotties, once they make the wine disappear they can avoid that one hour spin class. On the other hand, those are pretty puny pours. Here at Casa de Nibbe we operate under a very different definition of what constitutes a “glass” of wine. I don’t care what Science has to say about it.

Ingenious, no? I’m not sure if wearing a mask is recommended to keep one safe during online meetings, though we do know viruses infect computers, so it’s certainly not impossible that SARS-COV-2 may as well. We’ll have to wait to see what Science says.

All social intercourse is online now it seems. It amuses me that many individuals, in the course of an interview on the evening news, appear to place their face less than one half inch from the camera, such that unsightly nose hairs almost leap out of the TV screen like some man-eating tendrils in an episode of The Twilight Zone.

That, and have you noticed what’s behind most people being interviewed? Books, shelves upon shelves of books. I suppose it’s one way the person signals she’s smart. I was interviewed online recently and thought to do the same thing. Though I didn’t feel entirely comfortable sharing which books may (or may not) have influenced my character, not with strangers anyway. Spotting a couple titles by Nietzsche on my shelf shouldn’t lead one to conclude I’m a nihilist. Seeing Franzen’s The Corrections (a book I greatly enjoyed) isn’t evidence I’m a political liberal. Books in this sense are like guideposts, clues to where a person has been, not a detailed map of the path taken.