Funniest advice heard in the past few months: As you get older…

With that wisdom in mind we went for a walk near Eklutna Lake this weekend, a place none of us have been in many years. Nothing has changed there, including its Autumnal beauty.

I’ve presented at two conferences in as many weeks, one in Philadelphia, one in Alaska, participated in three (productive) days of meetings in Cleveland around the company we’re trying to get off the ground. Everyone present was enthusiastic around the blue ocean of opportunity out there. Back at home Fall is still in full swing. Only the highest peaks in the Chugach mountains are dusted by snow. Winter will bring peace, but oddly, nobody will say they are anxious for it to arrive. Like wanting to go to heaven, but not anxious to die.

In Philadelphia I walked by Independence Hall. It was under renovation, and a man I spoke with said it’s been under renovation, it felt to him, forever. I felt sad walking around it. Like our best years are now behind us. The odor of last night’s urine was palpable, re-hydrated by wet air pouring out of manhole covers. A few people had queued up at the entrance to the Liberty Bell exhibit. Maybe it was the hour of the day, the fact it was mid-week, or the overall malaise the country is feeling right now,  but there was a distinct feeling of neglect and a rude indifference to the events that had occurred here. I ran the gauntlet of homelessness surrounding the park on my walk back to the hotel. Most people paid me no mind but some glared at me and hissed, like their situation was partly my fault. 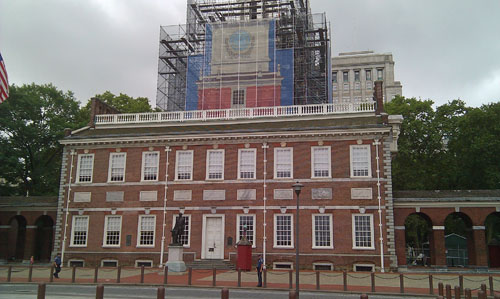 One thought on “Better Days”