2014/15 — The winter that wasn’t. No snow of consequence in months and too warm now to expect any. Might we get a surprise dump in April? Sure, not unknown — I’ve even seen snow in May. But the way this year’s been going I’m just as likely to have mowed the grass a few a times come April. Okay, I exaggerate, but it’s already in the mid to high 40s by day — it hit 50 the other day — and there’s no end in sight if you trust the forecast. This year is the first year in some time that the first day of Spring really felt like Spring, at least the way people living Outside typically experience it. The trees are leafless and the grass is brown but the days are long again and when the midday sun beams through the window in my office I position my chair to capture its full grace while I eat my lunch from a Tupperware container.

And when the snow had melted and the ice retreated the Alaskan looked to the sky and saw there a bright light, and he know from books he had read, that must be the sun.

The Winterless year has displeased Happy Wife greatly. She loves to ski in the way I love to bike. One of her favorite ski outings every year is to head down to Portage Lake in March to go crust skiing.

If I loved doing that as much as she does I’d be depressed by this time this year too, same as if you’d told me I couldn’t ride my bike for a whole year.

And so when we’re out and about together, able to walk on pavement instead of snow and ice, and the sun is shining on my face I resist saying, “Great day, innit Honey?”

I feel so bad for her I bought her a kayak. Her second favorite thing to do next to skiing (okay, 3rd favorite, husband admits, blushing).

Second one from the bottom. At least that’s the one I’m encouraging her to get. “Her” kayak has not been built yet, and for only $75 more she can get a custom paint job, and if you ask me I think that black-merging-to-red one is pretty sexy. She first saw this make on display at a store in Gig Harbor, WA, and was quite impressed by the design and overall quality. They’re not available in Alaska so it will have to be shipped (from Vancouver).

I challenged her and our friend Sally to fly to Vancouver and kayak back to Anchorage!

Suddenly, the fast approach of Spring this year doesn’t seem so bad to her.

Why, I even captured her in a smile the other morning 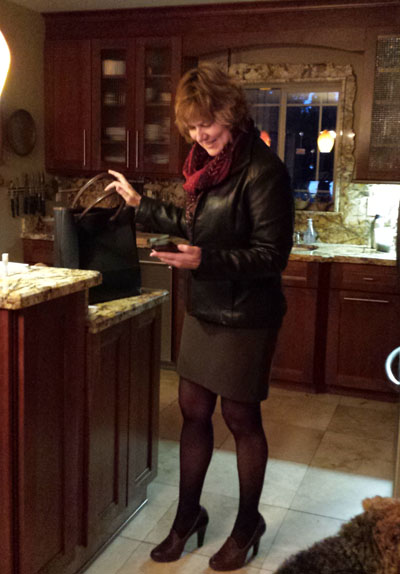 Probably looking at the picture of Her kayak that I texted her.

Either that or some Boy looking to gain her favor. No, I don’t really worry about such things, but I am not so naive to believe that when she leaves the house each morning presenting this well others don’t see what I see.

A nice lady stops by twice daily to check in on him, feed him and let him outside, but as good as she is to Harry she’s no substitute for Mom, the one keeping me alive, he thinks. And he’s right, Happy Wife has done all the heavy lifting when it comes to establishing his treatment plan, administering the plan (he has his own weekly pill box dispenser, two compartments for each day, morning & night, with a Lucky Charms-like assortment of pills in each compartment), walking him each morning (punctually at 5:30 am M-Th!), and generally doting on him every day. If not for all this — for her — he’d be dead by now.

Me? Well, if I have any complaints they seem trivial by comparison. There may have been experiences in this life I passed by or overlooked. Opportunities I may have (or should have) taken advantage of but didn’t. But you know what they say — There’s no unringing a bell. Okay, fine. I know what I have done. I know what I do have. So the lingering chime of that bell — my bell — has been pretty damn sweet to date, if you ask me anyway.