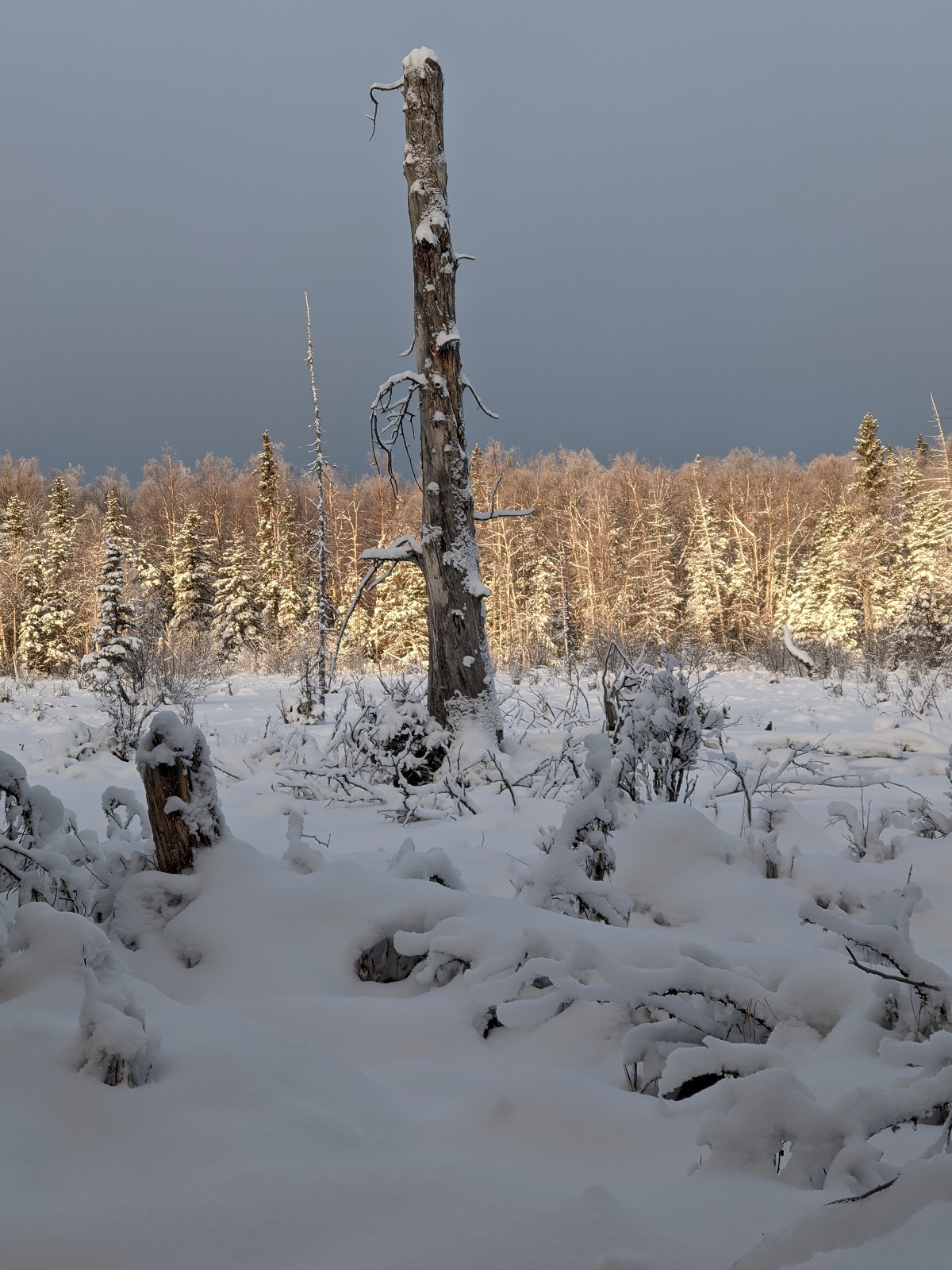 This was not here two days ago when we walked by. We asked others about it but nobody’s talking. The look ‘n feel is not otherworldly, not like the monolith in Utah (though I didn’t trudge through the snow to touch this thing – it kinda creeps me out). We’re going to keep an eye out and see what happens to it. It’s right off the path of one of our favorite low mountain hikes with The Dog, who issued his own wary, guttural growl as we passed by. Whether that was directed at the monolith or that brooding sky I can’t say.

It’s not always brooding. Even in our dimmest days it pays to look up now and then to take in the powdered treetops set against bluesky 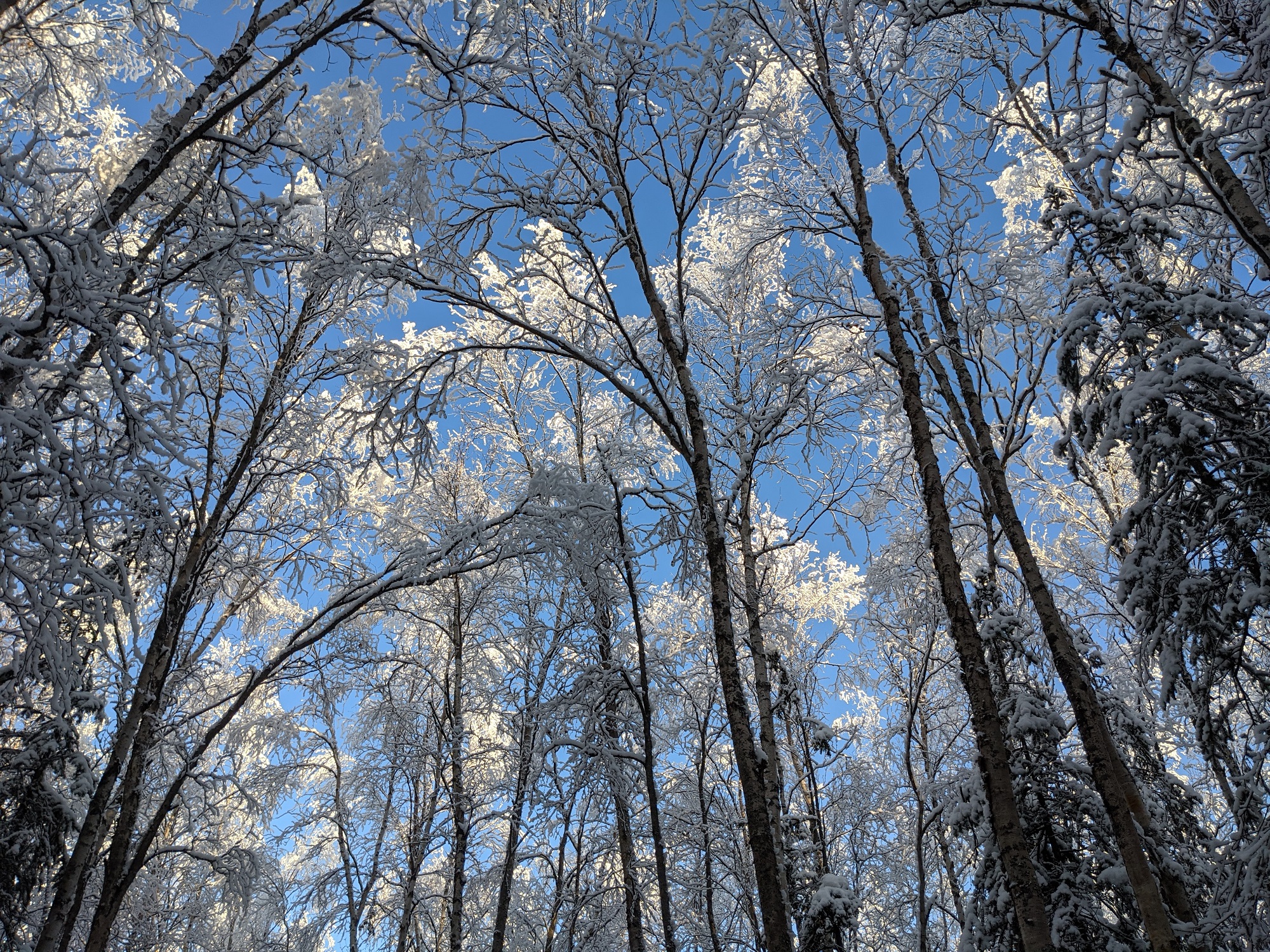 This time of year in Anchorage it’s 10:30 am before Her Majesty rises over the Chugach mountains to paint the eastern sky, lately visible from the window in our new spa shower in the master suite

Pardon the items on the sill. Being the remodel was my idea, although with important design inputs from Happy Wife for sure, the spa has become a feature in the house that I, in a sense, am responsible for. This new role amuses Happy Wife to no end. Admittedly, I do tend toward over doing it when it comes to squeegeeing damp surfaces, keeping the grout tidy, hanging towels where they belong (ahem), etc. However, as I am wont to point out, “Important chores don’t complete themselves.” Also, I am a minimalist when it comes to the sundries of ablution. That is, I much prefer all such items be contained to the built-in shelf on the back wall of the spa. You know, the one I designed specifically to be used entirely and only for that purpose? Nevertheless, being I am not an unreasonable man, I have compromised my personal preferences in this matter to permit the pumice stone and soap dish a permanent place on the sill. Unsightly as it is, I’m sure you will agree.

Update: Since this photo was taken, I have lovingly inquired of HW if she might find an alternative container for the soap – one consistent with her own sense of aesthetics, to be sure – to replace that ghastly bamboo soap dish that leaks goo out the bottom all over my otherwise spot-free sill! This request she granted, somewhat tersely, although without any real feelings of displeasure directed at me whatsoever. 😘

In certain places outside the home the caretaker role is often reversed. Especially where appointments of seasonal swag are concerned. The back porch, for instance, is HW’s domain. There you will find lights all twinkling, wreaths a-hanging, and this year no less than six luminaries a-glowing, homemade by HW herself. I sneaked the garden gnome (aka Norman) out of the house one night to photo-bomb the festive Feng Shui 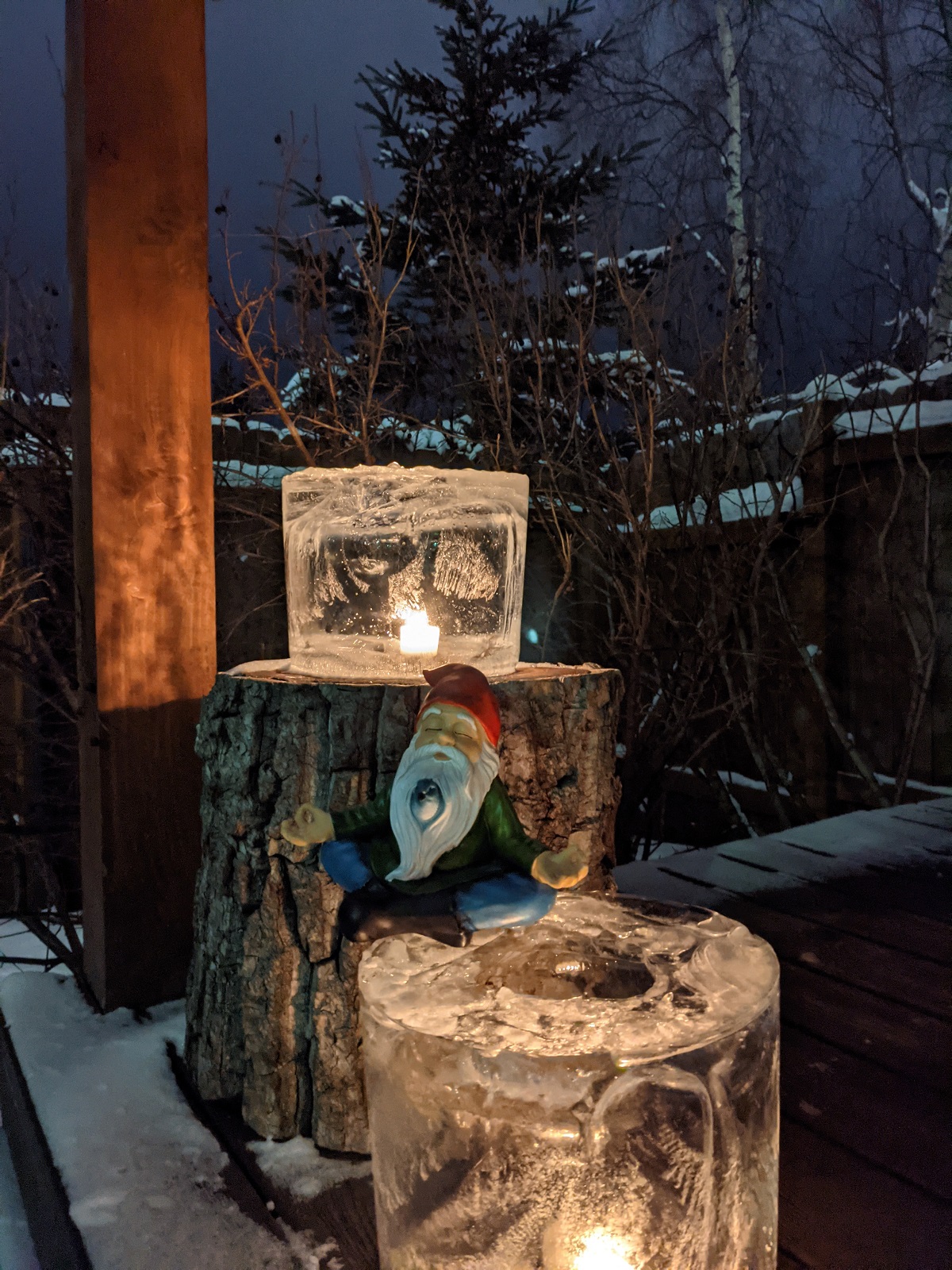 Note that feral sky. I think we got hammered with like a foot of snow that night. Ho hum. All I know is we’ve turned the corner so far as daylight’s concerned. I’ve lived up here now the better part of thirty-one years. Winter solstice is my favorite “day” of the year, if for no other reason than it marks the return of Her Majesty, sloth-like yes, but eventually she never disappoints.

Recall: As usual on Rod’s Alter Ego, most photos may be embiggened with a simple click (or touch), which are then opened in a new tab.