It interests me that both the Pfizer and Moderna vaccines exploit the same molecular biology to fight the novel coronavirus as the virus itself does to make us sick. You may have heard by now that these two vaccines are mRNA vaccines. mRNA stands for messenger RNA, the intermediate molecule between DNA and protein – DNA->mRNA->Protein – aka the Central Dogma.

The”active ingredient” of the virus is mRNA. It carries the instructions required to make more copies of the virus. But the virus can’t replicate itself, it first needs to get inside a human cell, break apart, and release the mRNA. From there, the cell recognizes the viral mRNA and translates it to proteins, specifically proteins required (in part) to create another viral particle. In a separate (more complicated) step, more copies of the viral mRNA are also made inside the cell. With all the required parts copied, in a final step they are re-assembled into a new virus particle which is effectively spit out of the cell (Exocytosis) to enter the circulation. From there the particle will infect more cells, make even more copies of itself, and so on. The point is, all of the hard work of replication is done inside your normal cells because they don’t recognize the mRNA as foreign. Detail

Enter mRNA vaccines. You create a synthetic mRNA to code for the specific part of the spike protein that is visible – just that small part – and get that mRNA into the cell and have it translated. Synthetic mRNA is the easy part, readily doable in any modern lab. Then, just like the viral mRNA, the cell translates the synthetic mRNA into protein, presents it to the immune system, which in turn creates specific antibodies against it. This is what it means to “train” the immune system. With that, you’ve now got circulating antibodies that will bind to any peptide that looks like that, including the “visible” peptide on the spike protein of the virus! Bind they do, and now the virus is prevented from getting into your cells. Game over, immunity achieved. Detail 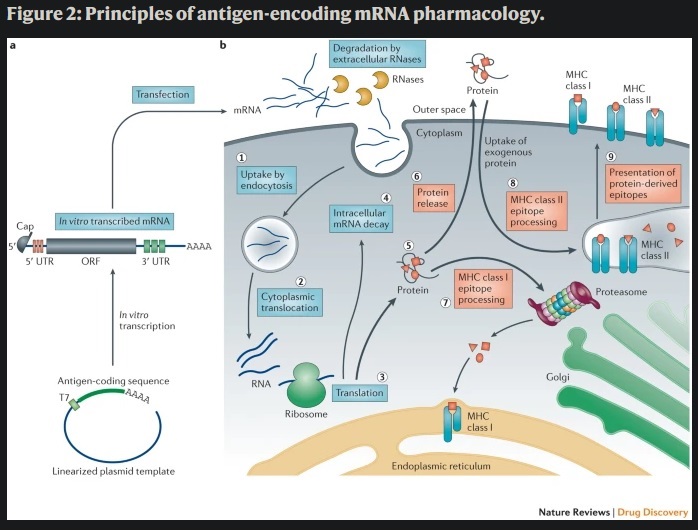 The point is the “active ingredient” of both the virus and the vaccine is mRNA. Both leverage the normal molecular machinery of the cell to do all the hard work for free! This is a very different approach compared to how previous vaccines were developed. The most difficult part of getting this approach to work is getting the vaccine mRNA into the cell, which evidently Pfizer and Moderna scientists have figured out. mRNAs are also easily degraded which is why the vaccines need to be kept so cold during distribution.