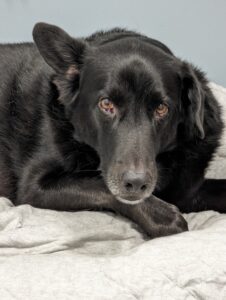 Update on Black Dog. The injury was not to either of his rear legs directly, surprising given that the day after he failed at the Dog Park they wouldn’t support him. X-rays at the clinic revealed a prolonged degenerative spine condition and a point of impingement, which evidently interfered with signals from the brain. Legs don’t move themselves, the brain tells ’em what to do. A standard test to diagnosis this problem is to squeeze the dog’s toes hard, hard enough to get him to yelp. Eventually Chester yelped, “But I had to squeeze pretty damn hard,” the vet said. Days of worrying ensued. Was this it, would he never recover? No – Prednisone for the win! A pretty aggressive dose at that. And man did he respond. After a week of therapy he’s walking again on his own, albeit like a little drunkard in those first few steps after getting up, which he’s also able to do himself now. The past couple of days he’s been eager to go out on short leash walks. I feel like I want to rename him Lazarus. Appetite and thirst, of course, are through the roof, and throughout the ordeal his spirit has remained undiminished. His days of mountain climbing may be over, but it’s not his turn on the rainbow bridge, that’s for sure.