Lots of shenanigans in Wisconsin recently. Opinions vary and a dime buys you a dozen. For all the outrage expressed at the role of BIG corporations and how they supposedly skew elections these days, ostensibly favoring republicans, where is the comparable outrage expressed at the millions of dollars public unions use specifically to get democrats elected, who in turn become the bosses of the public employees? Conflict of interest? On the other hand, I wouldn’t wish the job of a teacher in the public school system on anyone. Still.

And then there are these sweet little tweets. Makes Palin’s use of the word “target” a call for peace by comparison.

Oh well, I’m just pointing out the extant hypocrisy in all of this, largely on the part of the press but others as well. Regardless of your position, this is an issue for ThePeople® of Wisconsin to work through, the rest of us are spectators.

While other parts of the world variously unwind and spin out of control, we are thankful for the relative peace of a winter walk. 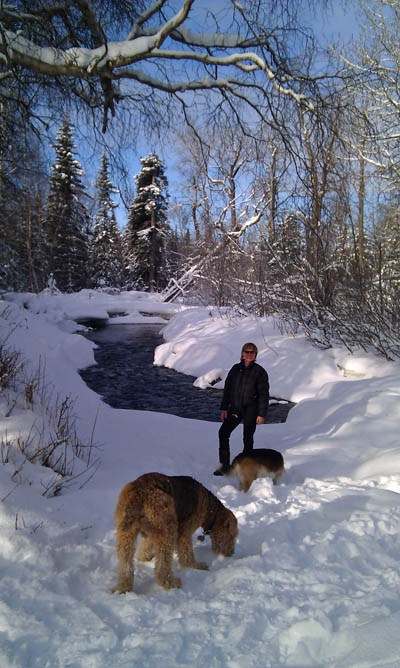 Okay, well, pretty uninspired if you ask me. Don’t get me wrong, getting primped and prepped for the judges whose job it is to evaluate and select the champion based on our breed standard is entirely unobjectionable to this Airedale. Who doesn’t enjoy a beauty pageant?

However, may I humbly suggest an athletic event as an added basis for judging the champion?

By way of demonstration, yours truly engaged in Pillow Talk.

I wanted them magenta but had to settle for blue.

You see, I’m covered with hair and consequently my paws ball up with snow like wet mittens. Shoes prevent that. By contrast, Your Highness, aka sister Lucy, is covered by fur. Technically, hair and fur refer to the same thing, but like many things the difference is in the details. For example, Lucy has guard hairs, which give her paws an enhanced hydrophobic quality, highly optimized for shedding winter snow. I concede Lucy is physically superior to me in a number of important ways, which is why I have turned my focus to more cerebral matters, like writing this blog for example. Bringing you razor sharp leading edge commentary week in and week out as I do here isn’t something I was fortunate to be born with, I have to work at it. I’m just saying.

Speaking of new shoes, Mom scored a pair of her own for Valentine’s Day. They were a fitting accoutrement at the burlesque show she and Master took in Saturday night. The show was at the same venue as their wedding in downtown Anchorage. The ballroom has the look ‘n feel of an old west barroom. The show featured a barely dressed woman performing an acrobatic dance in a silken sheet suspended from the ceiling; several provocative skits each of which featured a finale of jiggling pasties; and periodic breaks for – wait for it… Booby prizes. The prize winner was invited to the stage and asked to kneel and place their hands behind their back, and then instructed – naughtily scolded actually – to withdraw the prize by mouth from the (very) large cleavage of the show’s MC. This was a crowd pleaser. Wadded up dollar bills were thrown onstage from every direction in the audience. All or most of which goes to support a good intention cause. 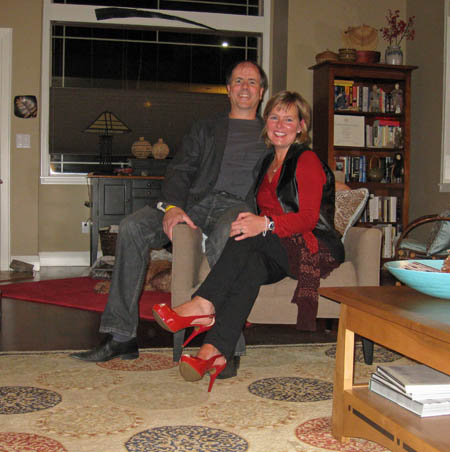 Speaking of the ubiquity of moose. We suffered a breach of our backyard fence last night by one of these treacherous beasts. Mind you, we’re talking a 6′ cedar fence, and although an adult moose is big ‘n tall it’s not like they can simply jump over a fence that high. Instead, this beast, evidently craving the particular twigs and buds inside our yard over the thousands of trees and shrubs extant in the Anchorage bowl, simply crashed through the fence. He (or she) smashed  ~4 of the dog-eared fence boards, broke both of the supportive 8′ 2-by-4s and forced its way through. 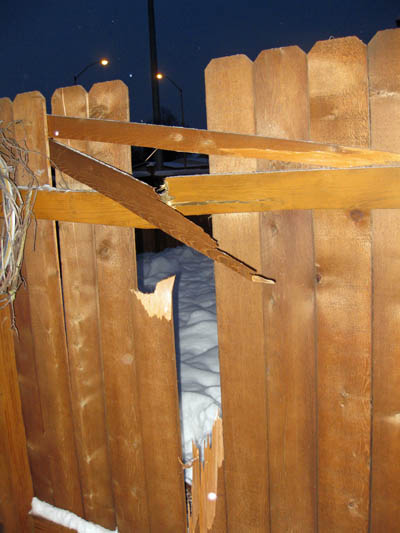 I was inside the house  during the entire assault, barking my ass off, but alas mom ‘n Master were away. I cannot express the feeling of helplessness this Airedale felt having to watch this beast systematically move through our yard, ripping asunder large branches from the Canadian Reds and Russian Olives, then moving on to mom’s Red Twig Dogwood and various other shrubberies. In my younger years I might’ve brought out some whoop ass of my own and launched myself through  the window glass to put the Fear of Dog in this moose. Instead, I could do nothing but bear witness to this pillage as if I were bound and gagged. Mom was near tears when she got home and saw the chaos. Heard Master mutter something about guns and moose roasts in the freezer.

Adding insult to injury, the beast had the gall to leave these gems behind.

This is war, Monty Moose. War I tell you! 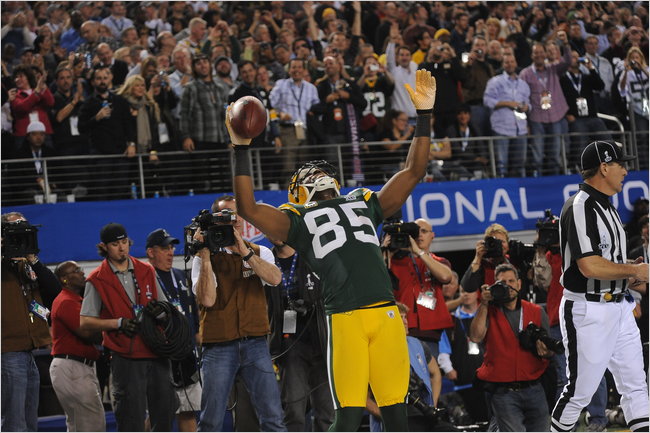 It was bad enough that the economic crisis crippled many private pension plans, 401ks, etc.. In many cases owners of these plans were partly to blame, ignoring the basis (or lack of it) for the extraordinary returns accumulating in their accounts; they blithely sat back and let the good times roll, hopefully right into retirement. In other cases, where retirement plans were managed by professional money managers, investors relied on them to keep their nest egg growing but at the same time safe from severe loss. In any case it all crashed like a house of cards. Paying for your own mistakes is one thing, but if you live in Hungary or Poland or certain other places, the government is now talking about seizing private pension plans [1] – what’s left of them – to pay for the State’s mistakes. I know what you’re thinking, that can’t happen here. Not in the U S of A, right? I’m not so sure, but in any case I’m merely a dog, one lacking any kind of nest egg, but if such a thing were to be considered here I can well imagine that the word target would be widely used in a whole new set of contexts.

While we wait for the apocalypse,  Mom got out for a ski today under 1-Airedale power. No not with me, rather a girly girl named Gypsy, the sweet companion of our friends Mark & Judith. There’s enough snow in the mountains to make for nice skiing, but here in the city we’re well below our annual average this time of year. Or so it seems. Later, on their way to the date night venue mom captured a moose munching on a Mountain Ash on a major downtown street. Moose are ubiquitous in the Anchorage bowl, but seeing one downtown is a bit unusual. When they get hungry they can get desperate. I still can’t get my head around how a 1-2 thousand pound herbivore can subsist, especially through winter, on branches, twigs and a few frozen berries. I miss breakfast and I’m not myself the rest of the day. 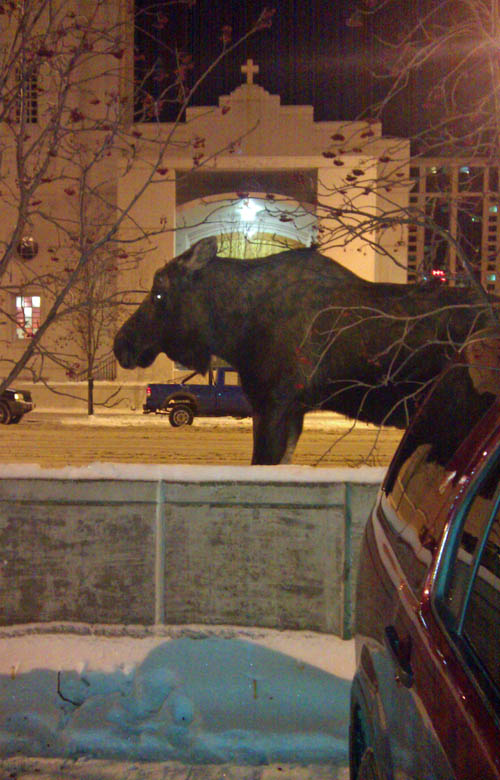 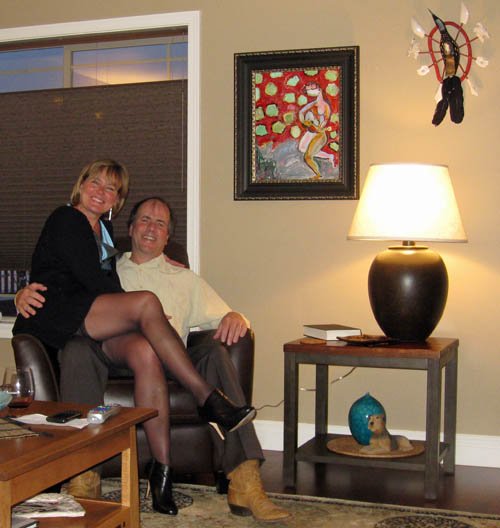 In fact, I strove to keep it similar to the previous look ‘n feel. White, clean, deliberately lean and uncluttered. I’d been using the Radio Userland blog software which served us mightily since 2003, but alas it was time to move forward.

For those of you who have e-mailed to let me know the Java applet at the Italy bike link (see Cycling Pages) is broken, and are desperate for a dose of nostalgia, Master has fixed the problem and it is once again functional. The applet requires you have the Java Runtime Environment installed and properly associated with your browser. You should safely ignore any warnings or cautions that may appear prior to the applet loading. Here at Rod’s Alter Ego we are above pretension and legerdemain. We will never attempt to steal your identity, your credit card information, or in any way compromise the highest level of trust we have earned over all these years with you, dear readers.